Who are they and why do they trot 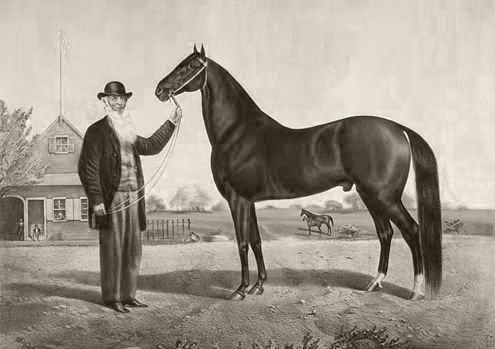 Hambletonian 10 is a really famous horse from a super long time ago. I'm not even joking; this horse is from the mid 1800s and he has a Wikipedia page. And a granite obelisk. Hambletonian 10 has a Wikipedia page, and I do not. And you probably don't either. If you do though, please follow me on Twitter because honestly, I could use some celebrity-based social media cred. Oh right, the horse. So yeah, he was apparently a horse that was both beautiful (a show horse) and fast (a trotter)! Wow!

I don't know what that means, but I saw on Wikipedia that he "had an unusual build, being low at the withers (15.1 hands), but high at the croup (15.3 hands)." Apparently we measure horses in hands.

Hambletonian is known as the father of modern trot, which I thought meant that he brought a particularly cool horsey style to it, but no he is literally the dad. His bloodline was so strong that nearly all American trotters can be traced back to him. WHAT!